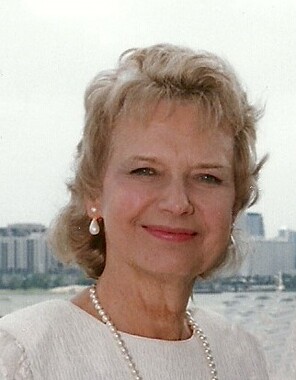 Back to Alice's story

Alice Alatza Hollingsworth passed away Feb. 12, 2020, at her residence.
She was born Oct. 3, 1931, in Marion, to William H. and Winifred (DeHaven) Rhodes. The family resided in Marion and Rigdon, Indiana until 1944, thereafter moving to Anderson where their father was employed at General Motors.
Alice graduated from Anderson High School Class of 1949 and attended Anderson University which included several night classes. While at AHS she was a member of the Honor Society, Jobs Daughters and other clubs and was a member of the Majorettes.
She was employed by the American Playground from 1949-1970 and again from 1978-1994, retiring as their sales manager in 1994 with a total of 37 years.
Alice also was the founder and director of Part-time Nannies from 1970-1978. She was a member of Madison Park Church of God. She attended Bible Study Fellowship for seven years. Alice was also a past member of Beta Sigma Phi Sorority and Daughters of Penelope. She was a real estate broker for many years and when her son was in school, she was a PTO officer and a room mother.
She is survived by her son, Rex Alatza; stepsons, Rob (Mindy) Hollingsworth, Shawn (Lydia) Hollingsworth; sister, Mary Kendall; and several nieces and nephews.
Alice was preceded in death by her husband, John Hollingsworth; parents; sister, Zelma Rhodes; aunts, Helen Henness, Kathleen Rhodes; and special cousin, Deloris Clair.
Services will be held at 11 a.m. Friday at Brown-Butz-Diedring Funeral Service & Crematory with pastor Tom Malbone officiating. Burial will follow in East Maplewood Cemetery.
Visitation will be one hour prior to the funeral service at the funeral home.
Post online condolences at www.brownnbutzdiedring.com.
Published on February 12, 2020
To send flowers to the family of Alice Alatza Hollingsworth, please visit Tribute Store.

Send flowers
in memory of Alice

A place to share condolences and memories.
The guestbook expires on May 12, 2020.

Rest In Peace Aunt Alice, you were loved by so many and you gave us wonderful Rex!!

A memorial tree was planted in memory of Alice Alatza Hollingsworth.  Plant a tree

Full Of Love Bouquet was purchased for the family of Alice Alatza Hollingsworth.  Send flowers

What a wonderful person and friend. You will be sincerely missed!! I loved you dearly !!!