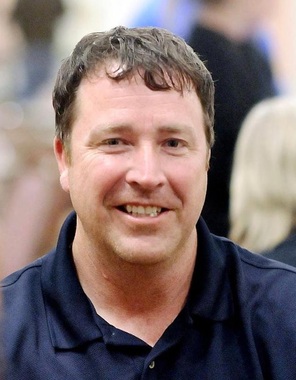 Back to Brent's story

Brent Ryan Holland, 47, of Anderson, died Feb. 3, 2020, at Community Hospital after a courageous battle with cancer.
He was born Aug. 12, 1972, in Anderson the son of Donnie L. Holland and Julie (Gullett) Eltzroth.
Brent was a firefighter and president of the Madison County Council. He was a rental property owner and honorary member of Indiana 151 National Guard Rangers.
He is survived by his wife of 20 years, Tonya (Savia) Holland of Anderson, whom he married March 14, 1999, in Hawaii; two sons, Jesse Holland and Shane Holland, both of Anderson; father and stepmother, Donnie (Kristine) Holland of Anderson; mother, Julie (Charlie) Eltzroth of Dunkirk; grandmother, Barbara Givan; father-in-law, Steve Savia; siblings, Alicia Aynes of Pendleton, Bo Tipton, Shawn Tipton, Sarah Miller, Connie Burress (Ray) Herbert, Kayla (Scott) Melton; brother-in-law, Tony Savia; aunts and uncles, Linda (Oden) Cebada, Sherry (Tom) Weaver, David (Peggy) Gullett, Geraldine (Dennis) Crouch; several nieces and nephews.
Brent was preceded in death by his paternal grandparents, Clyde and Reba Holland, and Dave Givan; maternal grandparents, Pat and Woody Gullett; three uncles, Ernest Holland, Doug Gullett and Larry Gullett.
Funeral services will be held at noon Saturday, Feb. 8, 2020, at Bethany Christian Church with Pastor Tim Bailey of Connection Pointe officiating.
Visitation will be from 2 to 8 p.m. Friday, Feb. 7, 2020, at Rozelle-Johnson Funeral Service, and one hour prior to the service Saturday at the church.
Memorial contributions may be given to the Anderson Fire Department Dive Team or the American Cancer Society.
Post online condolences at www.rozelle-johnson.com.
Published on February 4, 2020
To send flowers to the family of Brent Ryan Holland, please visit Tribute Store.

Send flowers
in memory of Brent

Donnie and Kris we are sorry for your loss . Sending you prayers of healing and peace in your heart. Your son was loved by many in this world was a better place with him in it. RIP Brent 🙏

Mike and Barb Rastetter
Donnie, We are so sorry for your loss of Brent. You are in our thoughts and prayers.
State Senator Victoria Spartz

Kathie (The late Joe) Swan
Donnie,
So very sorry for your loss of Brent.
Diane R Wilson
My deepest heartfelt sympathy to the family of Brent and his Firefighter brothers !
George & Bea Bray
So sorry to hear. Can’t believe it. Just not fair. Thinking of you in our prayers.
Jack and Linda Reed
Donnie and family we are truly sorry for your loss. May your memories of your beloved son give you Peace and Comfort.
(Nancy) Ellen Bales
Donnie and Kris, my late husband and I were your tenants on Ohio Avenue in 1990. Brent used to mow our lawn. I recall him being a special young man. I am so very sorry for your loss.
Ellen Bales
Indianapolis
Jack keesling
Donnie and family-We are saddened by this news. We feel your sorrow. You and your family are in our prayers. We have lost a good man.
View all