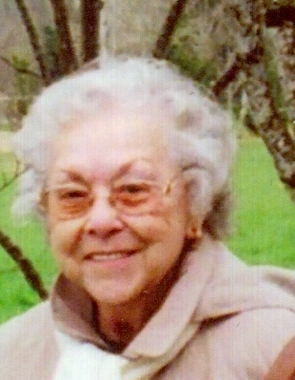 Back to Esther's story

Esther Pauline (Lawhon) Jarvis, 91, the matriarch of our family, passed away unexpectedly at Community Hospital on Jan. 17, 2020. She is now in the arms of Jesus and those who passed before her. A journey of eternal life has begun.
Esther was born in Noblesville, Indiana, to George and Cora Ellen (Dellinger) Lawhon on Dec. 1, 1928. She was raised in Indianapolis and Noblesville area. She was a graduate from Noblesville High School. She also lived in the Pendleton area before moving to Anderson where she resided most of her life.
Esther worked various jobs starting at a grocery store in Noblesville. She also worked in Pendleton and Anderson at the Browney Root Beer stand before becoming a manager at the well-known restaurant in Anderson, The Toast. She spent most of her career with General Motors and retired after 30 years. In her later years, her most rewarding work was a caregiver. Being a caregiver was a joy for Esther and her compassion of giving to others was no surprise. This prepared her for becoming a caregiver for her own sons.
Her love of being outside to garden, watching the birds and going fishing to catch the "big-one" gave her much happiness. She loved going to the movies especially western and watching John Wayne. Her most treasured attribute was her dish of chicken and noodles. They were a crowd pleaser and one of the talking points at the dinner table.
Esther was loving and very devoted to her family. Her spirit, wit, wisdom, strong will, loving, caring and giving to others will be missed. Our memories of her are embedded in our minds and hearts, and will no doubt be cherished forever. Our family was truly blessed, and it was an honor to have her in our lives.
Esther is survived by her sons, Rodney (Linda Habjan) Jarvis, Robert (Bobby) Jarvis; daughter, Denise (John) Blevins. Her family has grown over the years bringing a total of 14 grandchildren, 23 great-grandchildren and three great-great-grandchildren. Beloved sister, Marjorie Quear and brother, Ernest Lawhorn, several nieces and nephews, and her adorable furry companion, Zero.
A special thank you to cousins, Beverly Bradley for her help in caring for Esther and the loving support from Debbie Armes.
Esther was preceded in death by her parents; daughter, Sandra Kay Jarvis; her sons, Ricki and Ronald Jarvis; granddaughter, Devin Jarvis; and siblings, Jack Lawhon, James Lawhon and Charles Lawhorn, Sarah Brooks and Phyllis Oakes.
It was Esther's wish not to have a funeral service. A tree will be planted in tribute of her passing by the family.
Also, in honor of Esther, a Celebration of Life for family and friends will be held on Saturday, Feb. 15 at 4 p.m. at the Crystal Coop Event Center, 3400 W. 53rd St., Anderson.
www.loosecares.com
Published on February 11, 2020
To plant a tree in memory of Esther Pauline Jarvis, please visit Tribute Store.

Plant a tree in memory
of Esther

A place to share condolences and memories.
The guestbook expires on May 11, 2020.

Deb
As a young girl I always thought that Ester was so beautiful. I was sad to here she passed . Sending my condolences to Denise and the family. I loved all the Jarvis's. Especially Doc and Bobby!!❤🙏❤🙏❤
Beverly Bradley
Loved being with Aunt Esther we went to the casino and out to eat we loved to do this with each other also this is what I did with my Mom so when we did this my Mom was always with us we talked about my Mom and we would 😂 about her and my dad Esther loved to talk I learned a lot about her I miss her😇
Debby Badger Blankinship
So sorry to here of Esters passing she was a really special lady always had a smile on her faces
Jerri Buck
Condolences for the family thinking of all of you worked with your mother for years had a great time. She was a lot of fun. She will be missed.
Christy Oakes
Aunt Esther was a wonderful woman with a strong character, honesty, and incredible wit/humor. When my father passed she was a great comfort to her sister Phyllis. I so enjoyed seeing her @ her birthday party in November. Watching her visit with her sisters was priceless. Thoughts with Denise, Rod, and Bob Allen. LOL
Melody Lawhorn Bartron
Aunt Esther was one special lady. I really enjoy my overnight visits with her and the family when I was young.
And I remember going to her house and the "grown ups" playing cards. Seems like she was always the life of the party.
View all