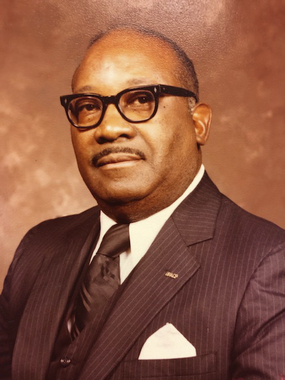 Back to George's story

ATLANTA - George A. Satterwhite, II, 95, of Atlanta, Georgia, formerly of Anderson, Indiana, died unexpectedly on Feb. 1, 2020, after a brief illness.
He was born on March 31, 1924, to the late Flue and Carrie Lewis Satterwhite and was raised in the Summerhill neighborhood of Atlanta. He was educated in the Atlanta public school system and attended Morehouse College and was a World War II Army veteran. An Anderson resident for over 50 years, he was civil rights activist, serving in several organizations including the NAACP, Urban League and the United Way, and was a co-founder of the Madison County Community Health Center.
He was preceded in death by his wife, Gertrude Chandler Satterwhite; grandson, Lantrelle Satterwhite; sisters, Ella Satterwhite Avery, Vera Satterwhite Jenkins and Irene Satterwhite Adams; brothers, Armie Lee Satterwhite, Nathanial Satterwhite, Lewis Satterwhite, Luther J. Satterwhite, Flue A. Satterwhite Jr., and Rufus Satterwhite.
He is survived by his children, son, George "Alex" Satterwhite IV, of Indianapolis, daughter, Elizabeth A. Satterwhite of Atlanta, and daughter, Karmyn Saunders, of Indianapolis; granddaughters, Veronica Fields Johnson (Daniel) of Atlanta, and Denise Satterwhite of Indianapolis; great-grandchildren, Danielle Johnson, Jocelyn Johnson and Lamar Tremain; cousins Luther Satterwhite and Alice (Jimmy) Penrose; sisters-in-law, W. Mae Satterwhite of Atlanta and Carlotta Chandler Washington of Cincinnati, Ohio; and brother-in-law, W.T. Adams, of Atlanta; and a host of cousins, nieces and nephews. Other relatives include Ronald L. Fields and Karan Satterwhite.
Funeral services will be held Saturday, Feb. 15, at 11 a.m. at New Hope United Methodist Church in Anderson. Viewing will be one hour before the service at the church.
Arrangements entrusted to L.C. May Funeral Service.
Published on February 9, 2020
To send flowers to the family of George A. Satterwhite, II, please visit Tribute Store.

Send flowers
in memory of George

A place to share condolences and memories.
The guestbook expires on May 09, 2020.

Deborah Maxwell Steele
Just sending my love, thoughts & prayers your way. A great person he definitely was . Sorry for your loss ❤️
Garry W. Miracle
My best wishes and condolences to the my former classmate Elizabeth and the Satterwhite family. I was acquainted with Mr. Satterwhite and greatly admired him for his activism on behalf of his community.
View all