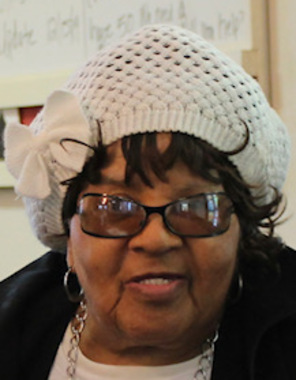 Back to Jessie's story

ANDERSON [mdash] Jessie R. Rozier, 82, passed away Feb. 2, 2020, at St. Vicent Heart Hospital Indianapolis.
Jessie was born Dec 27, 1937, to the late Marshall and Patsy Willis and was a 1956 Anderson High School graduate. She was a General Motors retiree and enjoyed spending time with family and friends.
Jessie is survived by her sons, William (Barbara Jackson) Davis, Brian (Beth) Davis, Michael Davis and Derrick Burris; daughter, Sybil Cooper; sisters-in-law, Jane Willis and Diana (Howard) Burt; 16 grandchildren; 25 great-grandchildren; three great-great-grandchildren; and a host of family and friends.
Jessie was preceded in death by her husband, James Rozier; sisters, Roberta Goodwin and Charlotte Taylor; and brothers, Randolph Willis and Robert Willis.
Service will be noon Tuesday at Second Missionary Baptist Church, 230 W. 14th St., with burial at Anderson Memorial Park Cemetery.
Visitation will be 5 to 8 p.m. Monday at the church and two hours prior to service.
Published on February 8, 2020
To send flowers to the family of Jessie R. Rozier, please visit Tribute Store.

Send flowers
in memory of Jessie

A place to share condolences and memories.
The guestbook expires on May 08, 2020.

To Tanisha and family. My condolences to you all. Your grandmother, Ms. Jessie was a blessing. I was an honor to meet you both. Her spirit was bright and the joy amazing. Ms. Jessie blessed me on the day we met without even knowing. She left an everlasting mark on heart. May you all find the comfort in each other during this time. My heart and prayers goes out to you all. Please know that the Lord God will comfort and carry you all through this difficult time.

Donald Archey
I was sad to hear the news that Mrs. Jessie had passed. I have embedded memories of growing up and attending Westville Elementary School. And almost every day after school Michael B and I would walk across the street to his house to play. Whenever Mrs. Jessie would come home from work before Jim arrived, and find Michael B and I playing downstairs, she would stop doing whatever she was doing upstairs, and come downstairs and talk to Michael and me, and she would always fix us something eat.
As I grew up and started playing Little League baseball, Mrs, Jessies would always pull me to the side and talk to me, and encourage me to never give up, even though I was the smallest, and littlest ki...d on the team. Mrs, Jessies was a vital part of my young life growing up in Anderson.
I am and will be eternally grateful to God, for allowing such a wonderful lady like Mrs. Jessie, to take time and show interest in me as a child.
My sincere condolences and prayers, are with the entire family of Mrs, Jessies, and may you find peace and comfort in our Lord and Savior Jesus Christ.
Donald Archey
Fort Lauderdale, FLRead more
Carrie Jackson, wife of the late Rev. Edgar Jackson, and family
Sending prayers and heartfelt condolences to the family of Jessie Rozier. I will cherish the memories of her love and kindness, and her faithfulness to the church. May God comfort you and wrap his arms around you at this difficult time. May she Rest In Peace with our Heavenly Father.
Jeffrey Sawyer
I was really sad to hear about the passing of Ms. Jessie. A large part of my youth was spent in the barbershop. Mr. Jim gave sage advice, while Ms. Jessie created a warm and inviting experience.
Mary Sue Smith & Juella Smith-Butts
To the family of Jessie Rozier , May the memories we shared live forever in our hearts.
Plasms 34:1
I will bless the lord at all times , His Praise shall continually be in my mouth.
Ju and Mary Sue
Aaron Hill
Test in peace my friend. Earth hath no sorrow that Heaven cannot heal. You will be greatly missed.
Melanye Floyd & Family
Prayers of comfort for the family. Cherish the memories. She was so special to all of us. Her calling me Pennye (my mom's name) will always be a memory I'll treasure.
Larry Gholston
My condolences to the family of Jessie R. Rosier. A longtime family friend. May her son’s find peace during this very difficult time. Rest easy Ms Jessie amen.
Larry & Cordelia Peal

Sending our deepest condolences and prayers to the family.

So Sorry for your loss Praying for you all

Lisa Anderson and The Anderson family
Our deepest condolences and prayers to the family. May the Lord heal and comfort you all.
View all