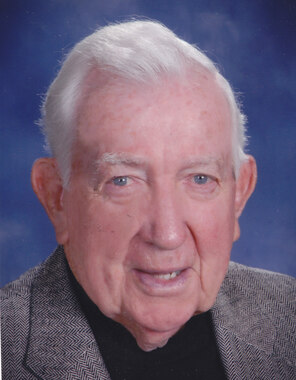 Back to Meredith's story

Meredith Merrill Church died on Dec. 11, 2019, at his home in Anderson, Indiana, at the age of 97.
He was born on July 28, 1922, at home in Indianapolis. His parents were the Rev. Dallas and Lorene (Hughbanks) Church. As the son of a Methodist minister, Meredith spent his childhood years with his family serving pastorates in a number of communities including Indianapolis, Mount Etna, Noblesville, Centerville, and Anderson. He graduated from Anderson High School in 1940 and started what became a 45-year career with General Motors as an assembly room sweeper at Guide Lamp. It was there that he met his first wife and the mother of his four children, Lois Anne Denton Church. They married on Sept. 6, 1942, and shortly after he was drafted and began service during World War II with the United States Army Air Corp. He was assigned to a bomber group stationed near Harwich, England, and served there until the end of the War in Europe. Following his discharge in October of 1945, he returned to Anderson and met his 18-month-old son for the first time!
He continued his career at General Motors serving at Guide Lamp, Delco Battery and Delco Remy. He concluded his career in January of 1985 as the personnel director of Fisher Guide Division of General Motors.
Following the death of Lois in October of 1989, he married Betty Jane Martin Groff, a lifelong friend, in 1990, and their marriage of nearly 30 years was blessed with grandchildren and great-grandchildren to whom, along with their children, they were devoted. Together they traveled the world and enjoyed their families and many special friends.
Meredith led a life of service to others. His natural leadership abilities were called upon by many organizations during his life and his dedication to serving others continued well into his nineties. He held numerous leadership roles in the several churches he attended during his life including Anderson Park Place Church of God, College Avenue Methodist Church in Muncie, and First United Methodist Church of Anderson. He became active in the Boy Scouts of America as a Scouter and in the course of serving in a number of important leadership roles, he earned the Silver Beaver award and the Silver Antelope award. He was active with the YMCA in Anderson, the Personnel Association of Muncie-Delaware County, the Society of Retired Executives (SCORE) and Tourist Club of Anderson. He was especially committed to his service with St. Johns Health System (now Ascension St. Vincent's) where he served as Chairman of the Board for many years. He was a longtime member of Anderson Country Club and he was an avid golfer. Among many travels with friends across the country and around the world, he enjoyed trips to the Masters Golf Tournament many times.
He was preceded in death by his first wife, Lois Denton Church; and his siblings, Leonard, Eldon and Manson Church.
He is survived by his wife, Betty Jane Martin Groff; his sister, Mae Ellen Gale; his children, Douglas D. Church (Kathy), Anne E. Morton (Ted), Patricia M. Arne (Bob), and Deborah L. Miller; his stepchildren, Martin Groff (Karen), and Gina Wardlaw (Russ); his grandchildren, Julia Kozicki (Jeff), Jay Church (Hillary), Marc Morton, John Arne (Heather), Bridget Johnson (Jason), David Arne (Jennifer), Beth Metelko (John), Margaret Miller (Aaron Hayes), Allison Miller (Nick Robbins), Christopher Miller (Isabel Bryan Barks), Peyton Groff, Dustin Groff, Jama Haggard (Ryan) and Kari Miller (Chris); and his great-grandchildren, JD Kozicki, Josh Kozicki, Zeb Church, Franny Church, Sasha Morton, Caleb Johnson, Nolan Johnson, Megan Johnson, Rose Metelko, Cecelia Metelko, Meredith Metelko, Margot Miller Van Hassel, Kaylee Haggard, Kennadee Haggard, Keightley Miller and Scarlet Miller.
His family is deeply grateful for his love and the faithful, generous, kind example he set as a husband, father, brother, grandfather, great grandfather and friend. We are also deeply grateful for the wonderful care givers and staff at Primrose for their genuine love and affection. He loved all of you!
The family requests that in lieu of flowers, gifts to the following in Meredith's memory would be appreciated to 1st Methodist Church of Anderson; Anderson University designated for the Lois Anne Denton Church Scholarship Fund St. Vincent's Hospital Anderson Children's Clinic or Boy Scouts of America, Crossroads Council.
A visitation will be held on Monday, Dec. 16 from 4 until 7 p.m. at Rozelle-Johnson Funeral Service, 229 S. Rangeline Road, Anderson.
A final visitation will begin at 9:30 a.m. on Tuesday morning, Dec. 17, with the funeral service following at 10:30 a.m. at First United Methodist Church, 1215 Jackson St., Anderson. Graveside services will follow immediately at East Maplewood Cemetery.
Post online condolences at www.rozelle-johnson.com.
Published on December 15, 2019
To plant a tree in memory of Meredith M. Church, please visit Tribute Store.

Plant a tree in memory
of Meredith

A place to share condolences and memories.
The guestbook expires on June 10, 2020.

Belita Anne Renner Hardwick
So sorry to hear of Meridiths passing. My dad was Gilbert Neal Renner and worked with Meridith in Labor Relations at Guide. Meridith was his hero!! I had to move my mom (Gretna Renner) and my Dad to Primrose Alzheimers facility in April of 2018. They met with Meridith and his wife for lunch one day after they moved to Primrose Assisted Living. My parents spoke very highly of Meridith. They both passed 54 days apart in the fall of 2018. My thoughts and prayers go out to your family!!
Linda Lupton
Anne, Betty and family--so enjoyed the many connections with Meredith over the past 40+ years. Loved his gentle spirit, patience and sense of humor. So grateful for his contribution to St. John's/SVARH.
View all