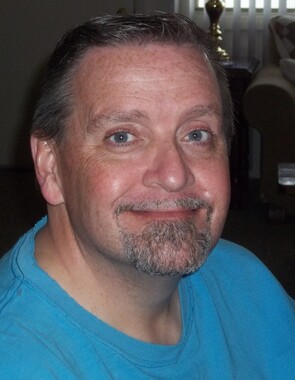 Back to Richard's story

Richard Edward Fulkrod, Jr. 53, of Anderson, passed away on January 14, 2020 at home. He was born on September 16, 1966 in Anderson, Indiana where he lived most of his life.
Richard graduated from Madison Heights High School in 1986 and received several certifications from Lincoln Tech.
Richard retired from doing his service as a correctional officer at the Pendleton Correctional Facility "I.R." for the IDOC. He loved racing, Hotrods, & Ratrods, all of his family & friends. His heart belonged to our Lord Jesus Christ. Richard proudly rang his tambourine in worship service, and did his best to serve Him.
His proudest moment in life was becoming "PapPap" to his first grandson Brayden and watching him grow.
He was a local member of Rat Nutts car club, where he was known as "Fat Rat", proudly driving his '49 Ford Pickup in rain, shine, snow or ice. He loved to build model cars with such precision and detail "until they were just right." Slot cars became a renewed passion he shared with his youngest son Brian as they spent many days tuning, adjusting and taking them to set lap times at the Purdue building.
Racing was in his blood, something that was instilled in him from his father. He followed in the same footsteps as his father, pursuing a career in racing and wanted it to be a family event. He put his own passion aside to pursue his eldest son Scott's endeavor in racing. Through this, he instilled his passion and taught his family how to unite and work together for a greater cause.
Richard was never selfish and gave to those in need even when he had no idea where his next check would come from. Mental illness stole this man from his family and friends on January 14th, but his death will not be in vain. God is given all Glory and Honor through all the tears and pain.
Richard is survived by his loving wife Robin Fulkrod, sons, Scott (Crystal) Fulkrod, and Brian Fulkrod, grandson, Brayden Fulkrod, siblings, Nikki (Bill) Oliver, Robert (MaryBeth) Fulkrod; Kelly Jones, Suzanne Gallant, Michelle Myers, Ronny Waters, Tim Waters; nephew Rob Fulkrod, and niece Stephanie Fulkrod.
He was preceded in death by his parents, Richard Fulkrod, Sr. and Bobbi Garner, adoptive mom Kay Mattingly, and brother David Garner.
Thank you to all his friends and family for loving him as well as supporting him, especially his lifelong best friend Sandy Funk.
A Celebration of Life will be held January 25th, 2020 at Main Street Church of God from 2-4pm.
Memorial contributions may be made to the National Suicide Prevention. In honor of Richard, the family asks you to do a good deed or "pay it forward" just as he would have done.
www.loosecares.com.
Published on January 18, 2020
To plant a tree in memory of Richard Edward Fulkrod, Jr, please visit Tribute Store.

Plant a tree in memory
of Richard

A place to share condolences and memories.
The guestbook expires on April 17, 2020.

Angie Choate
So sorry for your loss. May God be with the family and help them through this. My heart breaks for Robin and the boys and I will keep you all in my prayers. God Bless you all.
Nancy Humphrey
Robin I'm so sorry for your loss. I will keep you and the boys in my prayers. You were good neighbors.
Lori Hornbeck Dunn
So very sad to see this, Robin your in my thoughts and prayers. I am so very sorry for your struggles and pain. Your faith will sustain you, Richard was a kind soul and a long time friend. I know God’s undeniable grace and Richard is a peace.
View all